Group icons on the Windows Taskbar with Taskbar groups

Taskbar groups is a new open source program for Microsoft Windows devices to create groups of icons on the taskbar. The main idea of the program is to bundle multiple shortcuts on the taskbar to save space on it. While that may not be required on large resolution systems, it may still make sense on these for productivity purposes.

First thing you need to do is download the latest version of Taskbar groups from the project"s GitHub website. You find the source code files on the project site as well in case you want to check it out or compile the program from scratch.

Extract the Taskbar groups archive once it has been downloaded and run the executable file that it contains from the folder the contents got extracted to. 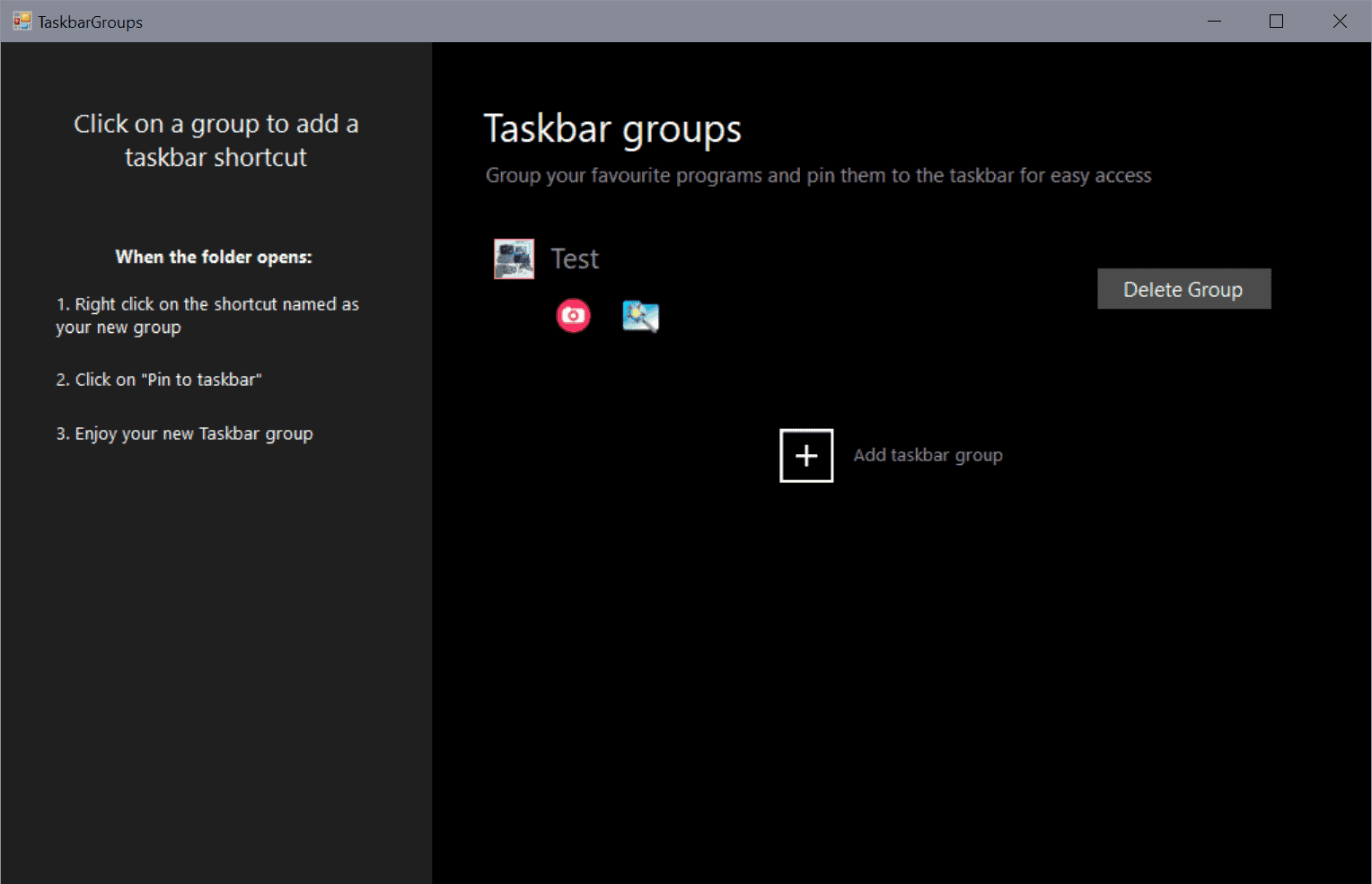 The interface is basic and simple to use. Select the "add taskbar group" option to create a new group for the taskbar.

You may name the group and set a group icon for it. All that is left to do then is to add program shortcuts to the group. The process is a bit complicated as you need to select exe file types as these are the only ones supported by the program. Use the file browser to pick the executable files from the system, e.g. portable programs, to add them to the group.

An option to select programs from the Start Menu or existing taskbar icons would be helpful; maybe that is coming in a future release.

Hit the save button once you have added the shortcuts to save the configuration. You may create additional groups and associate different shortcuts with these. All data is saved to the program folder; it may be a good idea to move the application to a secure place on the device to avoid deleting it and its configuration accidentally as all shortcut groups are deleted in this case.

The icons are not added to the taskbar automatically at this point. You need to left-click on the title in the program interface to open the new shortcut folder in Explorer. In Explorer, right-click on the folder and select the "pin to taskbar" option to add it to the taskbar.

A left-click on the new taskbar icon displays all available shortcuts, and you may launch programs individually with a click on the application icon.

Taskbar groups supports all taskbar layouts, e.g. on the side or top, and also multi-monitor setups.

What is the purpose of the program?

Taskbar groups has several purposes. Besides using it to bundle applications of the same kind, e.g. web browsers, image or video editing tools, or games, it may be helpful to bundle portable programs to the taskbar.

While you can ad individual portable programs to the taskbar, using a program that makes available a group may be usefult o some users.

Windows users who run low-resolution devices, e.g. a Surface Go device like I do, may also benefit from this as the taskbar has limited space on these devices.

Taskbar groups is a straightforward application that works well. It could use a number of usability improvements such as making it easier to add programs from the taskbar or Start to list, or adding an option to run all of the grouped programs with a click.

Now You: how many icons have you pinned to the taskbar? (via Deskmodder, Bleeping Computer)