True wireless earphones are great for a number of reasons, including ease of use, the convenience of having no wires, and the fact that good options with this are now available at very reasonable prices. Realme has been in the true wireless game for a while now, and its most recent launch, the Realme Buds Air Pro redefines just what users can expect for less than Rs. 5,000, with functional active noise cancellation and other useful features such as low-latency mode and Google Fast Pair.

However, if you look beyond the true wireless form factor to the more traditional wireless neckband style, Realme has a pair of earphones that"s even more impressive on paper. The Realme Buds Wireless Pro offers active noise cancellation, support for the LDAC Bluetooth codec, and a promise of great battery life, all for Rs. 3,999. Is this too good to be true, or is the Realme Buds Wireless Pro all it claims to be? Find out in our review. 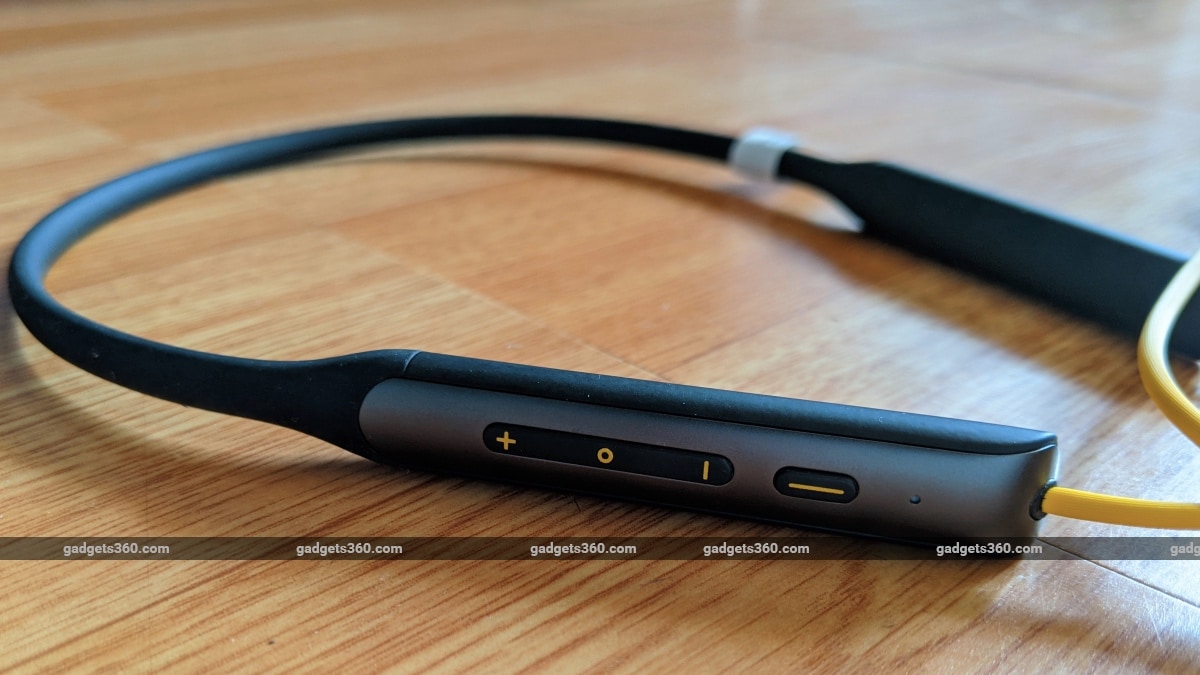 Physical buttons on the right side let you control playback, volume, and ANC

The Realme Buds Wireless Pro has all the right specifications

As far as wireless earphones go, the Realme Buds Wireless Pro is among the nicest-looking of the recent launches I"ve seen, and build quality is impressive. The headset has a flexible neckband with plastic chambers at the ends. There are four buttons on the right for playback, volume, and to cycle through the noise cancellation and transparency modes. At the bottom of the right side is a USB Type-C port for charging, protected by a flap when not in use.

There"s no power button; the headset has a magnetic power switch, so it turns on when the earpieces are separated, and turns off when they"re snapped together. While this method is quick and allows for fewer buttons, the headset is prone to accidentally switching on when in storage. This was sometimes bothersome, as the headset would automatically connect to my smartphone, diverting audio and leading to battery drain.

The Realme Buds Wireless Pro is available in two colours, Disco Green and Party Yellow, with the latter definitely the more sophisticated of the two. Realme"s signature combination of bright yellow and black works well. The cables, insides of the ear tips, and microphone grilles are all highlighted for contrast. The sales package includes a total of three pairs of silicone ear tips of different sizes, and a short charging cable.

Where the Realme Buds Wireless Pro excels is in its features and specifications. There is active noise cancellation, Bluetooth 5, support for the SBC, AAC, and LDAC Bluetooth codecs, a 119ms low-latency mode, and IPX4 water resistance. The earpieces each have a 13.6mm dynamic driver. Two of those points stand out: active noise cancellation and LDAC codec support are impressive for a headset priced under Rs. 4,000. 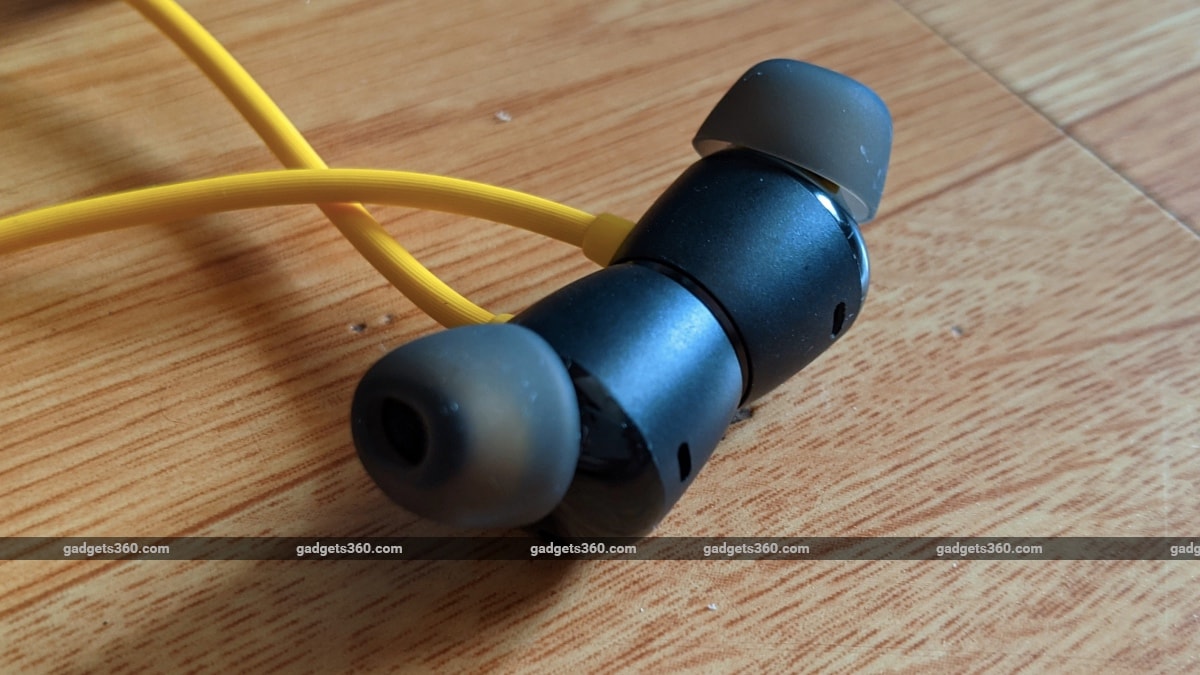 The headset has a magnetic power switch, controlled by separating or attaching the earpieces

Although battery life on the Realme Buds Wireless Pro is claimed to be 22 hours, this is under specific – and quite improbable – usage conditions. With active noise cancellation in use on occasion, the volume at around 70-80 percent, music streaming using the LDAC codec, and occasional use for voice calls, I was able to get only around 12 hours of use per charge. This isn"t exceptional, but is decent enough given the price and feature set.

With the Buds Wireless Pro, Realme has far outdone every other pair of earphones it has made thus far, and also completely changed my ideas of what to expect at this price. You"re unlikely to find a better equipped pair of wireless earphones than this for Rs. 4,000 or less.

I used the earphones with an Android smartphone for much of the review, with the LDAC codec and active noise cancellation in operation. I also used my Apple iPad mini (2019) and MacBook Air, playing music through Tidal, Spotify, and YouTube Music on the Realme Buds Wireless Pro.

Support for the LDAC codec means that the Realme Buds Wireless Pro have the theoretical ability to bring out more in high-resolution audio tracks, and testing the headset with music on Tidal quickly confirmed this. There"s plenty of detail to be heard on the earphones, especially with Tidal Masters. The Weeknd"s Die For You sounded full, spacious, and intense, and largely unlike what I"d have expected from a pair of wireless earphones priced under Rs. 5,000. The faint elements at the start of the track were distinct and clear, with the bass sounding tight and refined.

What particularly surprised me about the quality in the sound was that it didn"t just stop at refinement in the bass and detail. The Weeknd"s soulful vocals were sharp and precise, while highs were crisp with just enough sparkle at the top to be felt, but not unpleasantly so. However, the most impressive aspect was the soundstage, which felt significantly wider than I"ve heard on any earphones in this price range. 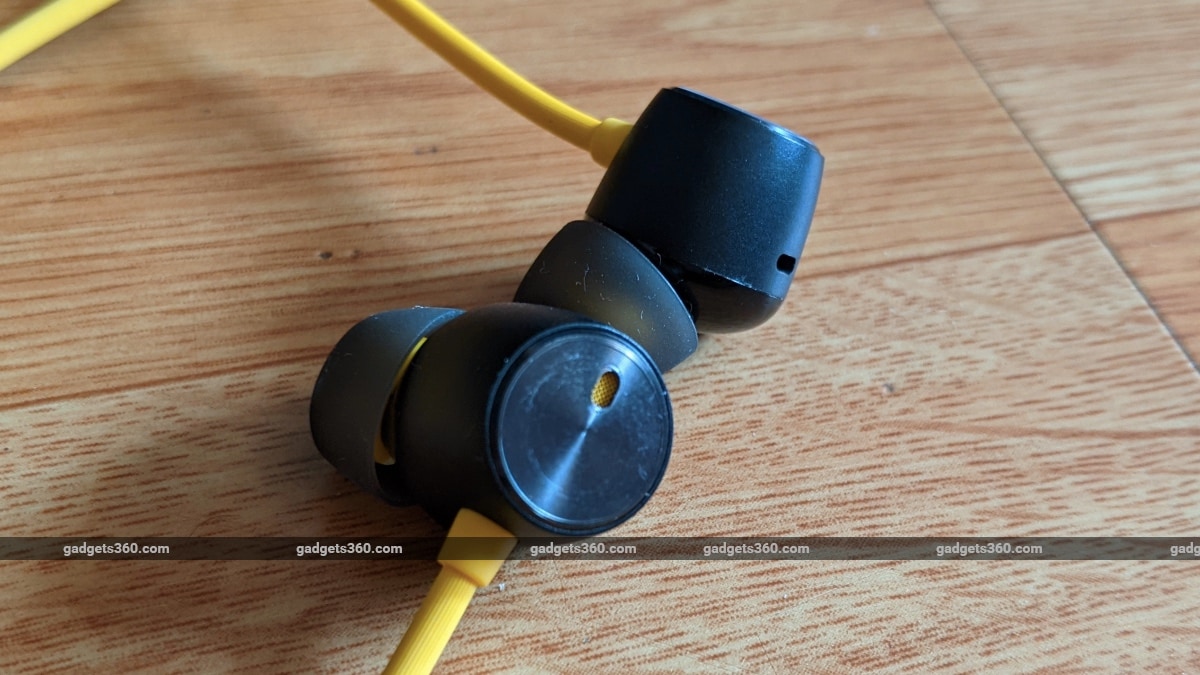 The use of advanced codecs usually means that there"s a considerable dropoff in sound quality when listening to compressed audio tracks, and that is the case even with the Realme Buds Wireless Pro. Although tracks on Spotify did sound a bit less detailed, with a slightly narrower soundstage, this didn"t take too much away from the overall quality of the sound.

Listening to Suomi by Chill House artist Cantoma was as enjoyable as on the considerably more expensive aptX-enabled Creative Outlier Air that I had on hand to compare with. Although the level of detail was lower with the Realme earphones, their somewhat U-shaped sonic signature remained as enjoyable and refined as with high-resolution music, with calculated bass and precise mid-range.

Something that I did find odd about the Realme Buds Wireless Pro was how much of a difference active noise cancellation made to the sound. In addition to the obvious reduction in ambient noise, turning on ANC oddly also changed the way music sounded on the earphones, taking a bit of grunt and edge and of the sonic signature. I found that the earphones sounded considerably fuller with ANC switched off, and tended to use the feature only when actually needed rather than all the time.

The active noise cancellation itself is reasonably capable for the price, offering a noticeable reduction in noise. Regular household sounds were reduced by a fair amount, particularly air conditioner and fan sounds, while urban outdoor noises also seemed to have the bite taken out of them. It isn"t exceptional performance and there"s still a bit of droning to be heard even with noise cancellation on, but it is roughly on par with the ANC performance of the Realme Buds Air Pro.

The transparency mode was as good as on the Realme Buds Air Pro as well, offering a natural-sounding hear-through effect. The low-latency mode, which can be activated through Realme"s companion app, disables the LDAC Bluetooth codec and takes some of the edge out of the sound, but does offer a slight improvement in latency.

I didn"t face any trouble with voice calls on the Realme Buds Wireless Pro, with decent performance across both regular as well as data-based voice calls.

Although ANC is effective, it strangely affects the sound quality with music, and as a result I only used it when I actually needed to

The Realme Buds Wireless Pro is an impressive pair of wireless earphones, both on paper and in practice, getting much of its feature set right at a very reasonable price. If you"re looking for very good wireless sound on a budget, there isn"t much else at this price that sounds this good, thanks to good tuning and LDAC Bluetooth codec support. Decent active noise cancellation is a useful addition, although it does affect sound quality a bit when in operation.

For the Rs. 3,999 price of the Realme Buds Wireless Pro, there"s very little to complain about. Unless you want the convenience of the true wireless form factor, this is our top recommendation among wireless earphones under Rs. 5,000. If you do prefer the ease of use that true wireless options offer, the Realme Buds Air Pro is decent for Rs. 1,000 more, but doesn"t quite match up when it comes to sound quality.

Which are the best truly wireless earphones under Rs. 10,000? We discussed this on Orbital, our weekly technology podcast, which you can subscribe to via Apple Podcasts, Google Podcasts, or RSS, download the episode, or just hit the play button below.