The Mandalorian Season 2 Episode 8 Recap: A New Hope and a Teary Goodbye

The Mandalorian took a big step towards its new future as the season 2 finale — Chapter 16: The Rescue — as we (WE REPEAT, BIG SPOILER ALERT) bid farewell to Grogu. The teary-eyed Mando (Pedro Pascal) was all of us. Having put everything at risk to be reunited with him, Mando then had to let him go. We don"t know when (or if) we"ll see the little green critter next. At least Grogu is in very safe company, with The Mandalorian season 2 episode 8 dropping the biggest connection as yet to the larger Star Wars universe: Luke Skywalker (Mark Hamill). It was the Jedi who saved the day in the season 2 finale, swooping in at the last minute to take care of the Dark troopers that were about to level Mando and Co.

Now that Mando has fulfilled his mission — reunite Grogu with his kind — and the threat of Moff Gideon (Giancarlo Esposito) has been neutralised, it sets up a very different look for The Mandalorian season 3. Mando promised anything in return to Bo-Katan for her help, who also suggested he reconsider helping her retake their home planet of Mandalore, and it"s possible that The Mandalorian season 3 will find our titular beskar-sporting protagonist doing just that. In doing so, he would finally be a true Mandalorian. Though I"m sure Mando will have something to say about that, having lived all his life with values that he only recently learned are associated with a zealous cult.

Chapter 16: The Rescue — directed by Peyton Reed (Ant-Man) who was also behind The Mandalorian season 2 episode 2 — begins on an Imperial Lambda-class shuttle, which has Dr. Pershing (Omid Abtahi) on board. It"s being chased by Slave I, the ship owned by Boba Fett (Temuera Morrison), which naturally has Mando and the others on board too. Fett hits the Imperial shuttle with an ion cannon and disables their electronics, allowing them to board it. In walks Mando followed by Cara Dune (Gina Carano) pointing blasters at the two Imperial officers. One of them offers to negotiate but is immediately shot by the other, who"s now pointing a gun at Pershing"s head.

He berates Cara after he spots her New Republic badge and notes that he was on the Death Star. “Which one?” Cara responds to deflect from the emotions welling up — the Death Star blew up Alderaan, a planet where Cara lost everyone — but the Imperial officer snatches onto that emotion. He then launches into a tirade about how the galaxy didn"t shed a tear and instead cheered when millions were killed onboard the two Death Stars. And he has a point on one level. Not everyone on the Death Star deserved to die, but this isn"t really the time and place for a nuanced conversation like that. Before he can go on further though, Cara blasts him.

The Mandalorian Season 2 Documentary Special Set for Christmas on Disney+ 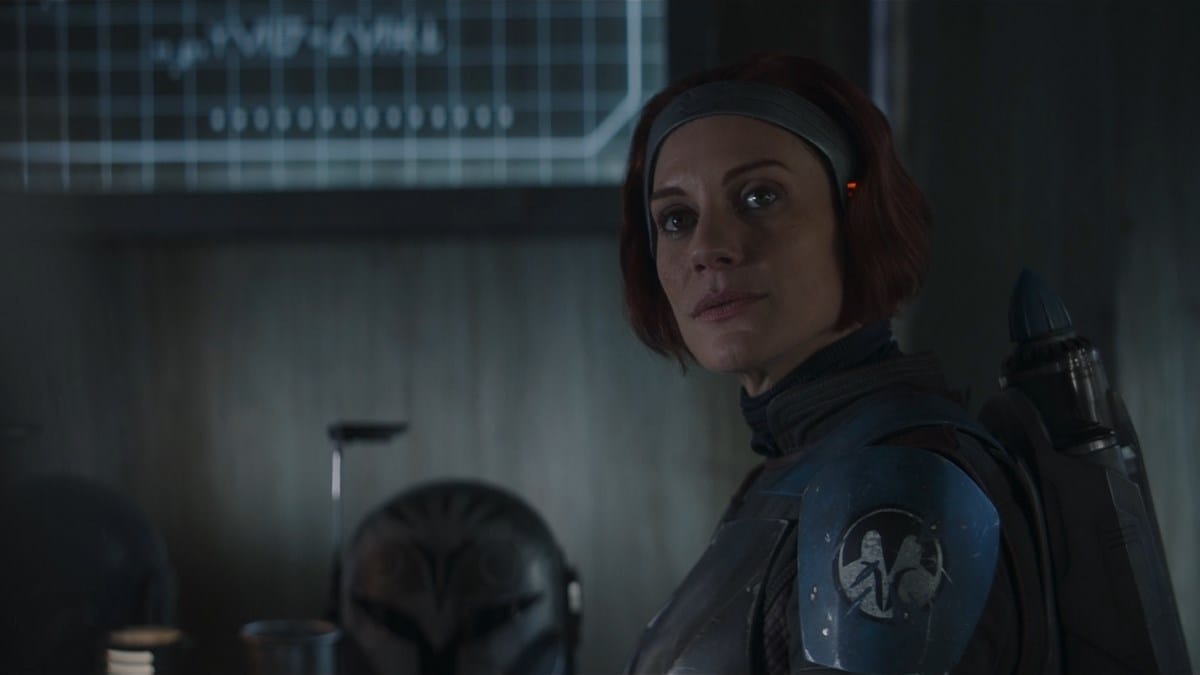 With Pershing secured, Mando and Boba Fett pay a visit to Bo-Katan Kryze (Katee Sackhoff). Mando says he needs their help to rescue Grogu, but things don"t go very well due to Fett"s presence. Bo-Katan has no love lost for clones — she immediately recognises Fett"s voice because she"s heard it a thousand times — and she even disrespects him by calling his father a “donor”. But though Bo-Katan is sticking to words, her deputy Koska Reeves (Mercedes Varnado) takes things a step further. The two get into a scuffle and smash up the bar, before Bo-Katan steps in and tells them to quiet down. Bo-Katan then tells Mando that she"s willing to help, but she has certain demands of her own.

Top of the list is her desire to square off against Moff Gideon herself. She plans to kill him and take the darksaber for herself. She doesn"t want anyone to interfere. Mando is completely fine with that, as Grogu is his only priority. And oh, Bo-Katan also wants Mando to seriously reconsider joining her cause. Mando says he"s ready to do anything once Grogu is safe. With that set, the newly-formed team — Mando, Fett, Cara, Bo-Katan, Koska, and Fennce Shand (Ming-Na Wen) — form a plan to take on Moff Gideon"s light cruiser. It involves the four women launching an attack and heading to the cockpit, which would serve as a distraction for Mando to slip in and grab Grogu.

Of course, there"s the elephant in the room they need to address: Dark troopers. Pershing reveals that the current generation of Dark troopers is all android. Humans were the last problematic variable, so they got rid of them. But the Dark troopers draw a lot of energy and hence, they are usually kept powered off. It takes a few minutes for them to wake up, and Mando must get to their bay before that to stop them. Bar minor hiccups, the plan goes well quite smoothly for the early going, with the female sharpshooter squad taking out every Stormtrooper they encounter before storming the bridge.

But Mando has a tougher time by himself. He gets to the Dark trooper bay barely in time, forcing him to fight with one of them. This is a way for The Mandalorian season 2 episode 8 to show how formidable these Dark troopers are, so audiences understand their true threat. Mando is repeatedly pummeled by the Dark trooper and he has to deploy his full arsenal, including fire (which doesn"t seem to do much), the whistling birds (those tiny rockets on his left arm, which also don"t seem to do much), and then his beskar staff (which finally does the job, as Mando wedges it under the trooper"s helmet and essentially beheads him). He then blasts the other Dark troopers stuck in the bay out of the ship. 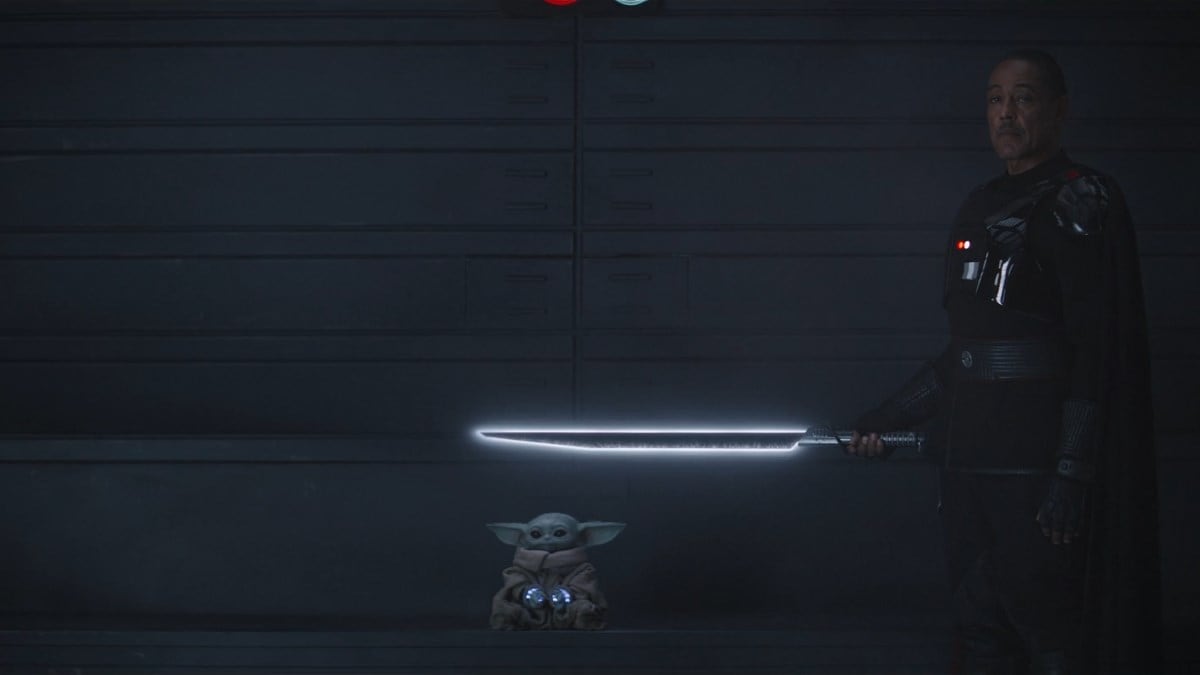 Grogu, and Moff Gideon with the darksaber in The Mandalorian season 2 episode 8
Photo Credit: Disney/Lucasfilm

With that done, Mando proceeds to collect Grogu. But in what is a predictable turn of events, Moff Gideon is standing guard personally, with the darksaber hanging over Grogu"s neck. Mando says he"s only there for the kid and doesn"t care about the darksaber, and Gideon lulls him into a false sense of security by using Mando"s bond with Grogu to his advantage. Just as Mando steps in to pick up the child, Gideon launches into him with the darksaber, but the beskar comes to his rescue. Mando recovers after several hits and pulls out the beskar stuff. A duel, yay! It doesn"t last very long, as Mando turns defence into attack and disarms Gideon. But Mando doesn"t kill him, which Gideon is surprised by.

Mando arrives on the bridge, with Gideon in cuffs, a darksaber in his right hand, and a freed Grogu in his other arm. He throws Gideon on the ground, delivering him to Cara as she requested. Gideon is a valuable asset to the New Republic. But Bo-Katan is clearly displeased, and that"s because Mando has the darksaber in his hand. Of course, Mando has no problems with handing the darksaber over, but she doesn"t accept it. Gideon explains that it"s not the weapon that carries the power, but the story behind it. To truly wield the darksaber, you must defeat the person who previously wielded it. And because she didn"t defeat Gideon, Bo-Katan would just be a pretender if she accepted the darksaber from Mando.

I"m sure this is going to be the cause for problems on The Mandalorian season 3. The remaining scattered Mandalorians will see our titular protagonist as the true saviour and future ruler, even though he has no interest in that position. And though he"s ready to yield the darksaber and that position to Bo-Katan, that may not be enough for her to emerge as the queen in everyone"s eyes. It seems like a dumb rule, but honour and valour means a lot in the Mandalorian warrior culture. All this will only get more complicated because of Mando"s links to the Watch, an extremist offshoot of Mandalorian society.

But that consequential moment on The Mandalorian season 2 episode 8 is interrupted by a more existential problem: the Dark troopers have returned. You can"t really kill a non-biological lifeform by throwing them out of an airlock. Gideon makes a very obvious point; if Mando had such a hard time dealing with one Dark trooper, imagine what"s it going to be like to face an entire platoon. Still, cornered in the cockpit, Mando and Co. prepare to face the Dark troopers. What else can they do? Outside, the Dark troopers line up and begin to smash through the blast doors, with the rhythmic pounding creating a threatening soundtrack of its own. 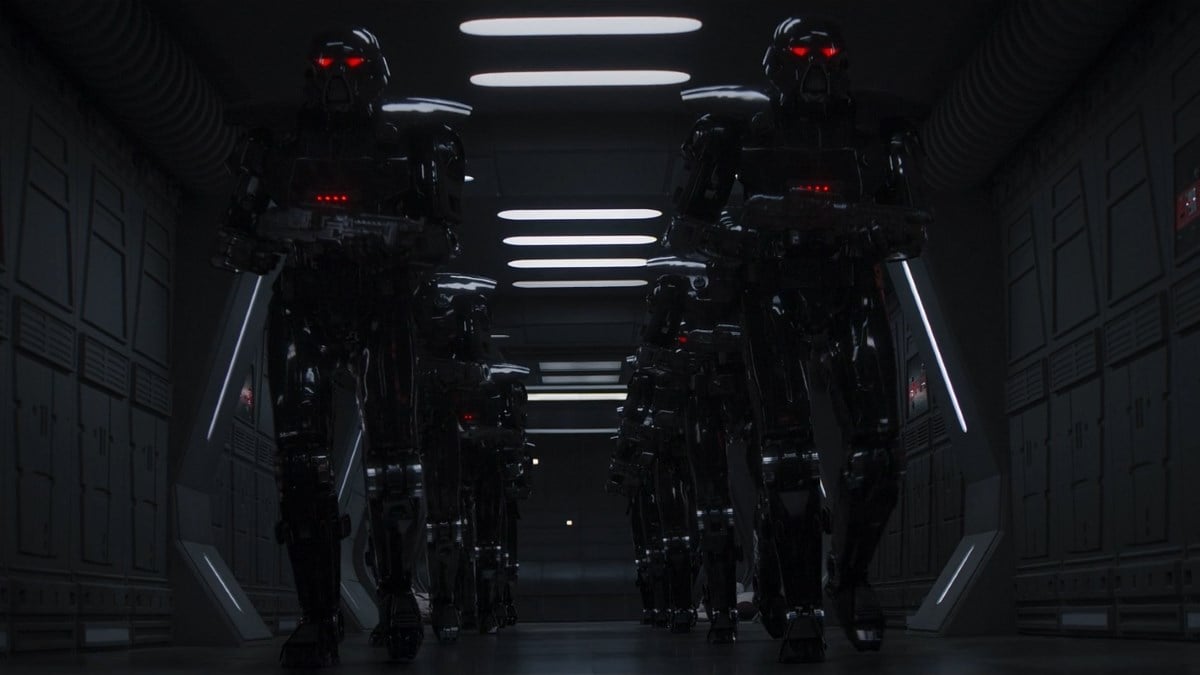 And just when all hope seems lost — Gideon is smiling widely, like any villain ought to — a lone X-wing fighter flies in. Cara sarcastically jokes that the day has been saved, but that"s because she doesn"t know who"s on the ship. Grogu"s ears perk up, hinting that a Force-sensitive individual has arrived. And the Dark troopers stop pounding on the door as well, seemingly recognising the presence of a new threat. A hooded figure steps out of the X-wing and confirms both those assumptions. The threat is real and it"s powerful with the Force alright. It"s a Jedi who seemingly eats Dark troopers for breakfast, as he waves them like they are a house of cards and cuts through them like butter.

The Mandalorian season 2 episode 8 does its best to hide the Jedi"s identity, with the hood covering his face and all the lightsaber action being shown on a monitor only. But then it gives us a much bigger clue: the lightsaber is green. There aren"t many Jedi alive at this point — The Mandalorian is set after Star Wars: Return of the Jedi — and there are even fewer with a green lightsaber. Add to that the fact that this particular Jedi is powerful enough to deal with so many Dark troopers. The answer, as most Star Wars fans will have likely guessed by now, is Luke Skywalker.

That"s confirmed a minute later, as he steps through the blast doors and greets our heroes, who have all been spectators just like us. Mark Hamill is named in The Mandalorian season 2 episode 8 credits, but it seems to me that the face of a young Luke has been slapped on another actor, just as they did with his sister Leia Organa at the end of Rogue One. It"s not a very convincing effect, but I guess it does the job. More importantly, this is now the biggest nostalgia pull for The Mandalorian, and it can"t get much bigger than bringing back Luke Skywalker.

It seems Luke heard Grogu"s call from the seeing stone in The Mandalorian season 2 episode 6, and he"s traced him to the Imperial cruiser. Mando notes that Grogu is hesitant to go with Luke, who says that"s because he"s waiting for Mando"s permission. The father-son bond has really grown this season, and it goes to another level as Mando picks him up and bids goodbye. Grogu responds by reaching out and caressing his helmet, and Mando — surprisingly — takes off his helmet in front of everyone so Grogu can see his face. It"s a very tender and emotional moment as Grogu finally sees the guy who"s been caring for him. As Grogu touches Mando"s face with his tiny hands, Mando closes his eyes. 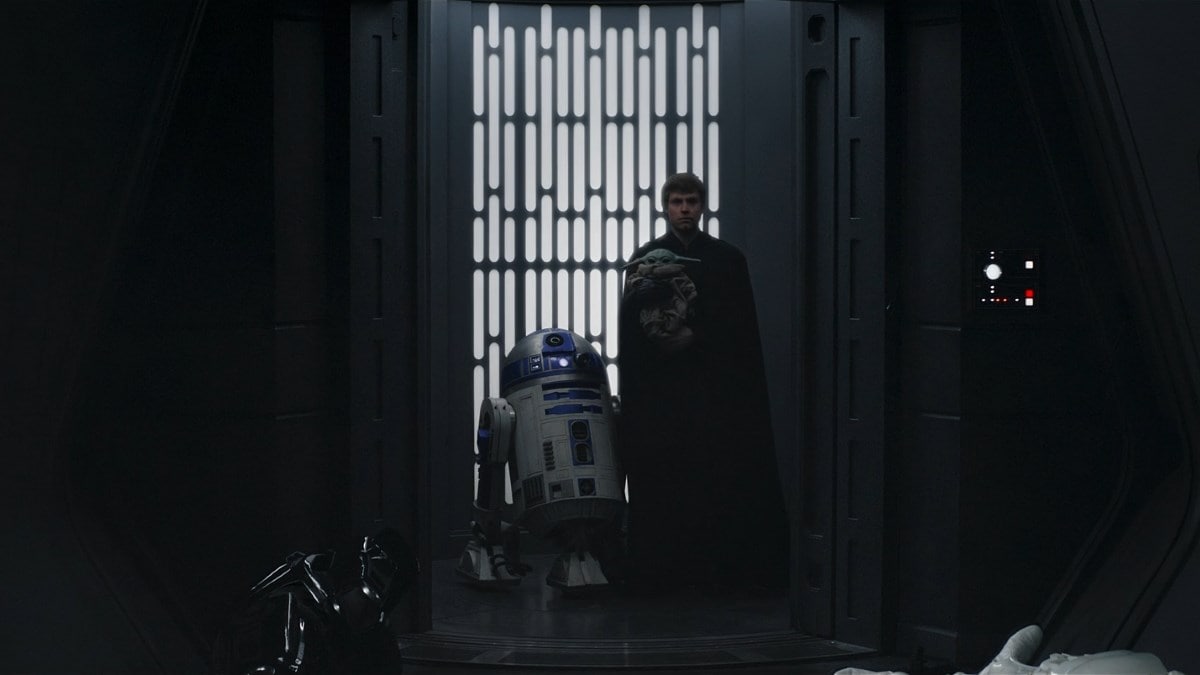 Mando then places Grogu down, but the little green guy is still holding onto Mando"s leg, clearly not wanting to leave. That changes as R2-D2 steps out from behind Luke, and the droid and Grogu seem to magically connect. R2-D2 seemingly turns into a giddy child, beeping without control. And it seems like the droid is a bigger reason which convinces Grogu to finally go with Luke. As Mando stands there crying his eyes out, Luke, Grogu and R2-D2 walk off into the elevator and we cut to black as the doors shut.

Season 3 of The Mandalorian without Grogu? I can"t :(