Wolfwalkers on Apple TV+, from director Tomm Moore, is the culmination of a thematic trilogy — dubbed the “Irish folklore trilogy”, it consists of the Oscar-nominated The Secret of Kells, and Song of the Sea — that stretches over a decade ago. And for the third and final chapter, Moore (along with co-director Ross Stewart, and writer Will Collins who also wrote Song of the Sea) brings in the myriad themes from his previous ventures, about parenting and man"s relation to nature, and marries them with new ideas that are a lot more political than before. And of course, it"s still got fantastical elements (in this case, humans who can control wolves). Wolfwalkers then is a movie that works equally well for children (the primary target audience) and their parents (who"ll be sitting alongside them).

And I haven"t even gotten to the best part. Unlike the computer-generated animation that now dominates the biggest movies (from the likes of Pixar, DreamWorks, and Sony Pictures) in this field, Wolfwalkers has been entirely drawn by hand. It"s the favoured — and in fact, only — approach for Cartoon Saloon, the Irish animation studio that"s behind Moore"s trilogy, as well as fellow Oscar nominee The Breadwinner. That allows Wolfwalkers to visually differentiate among characters and environments. And in turn, impart meaning through animation itself. For instance, the townspeople in Wolfwalkers are drawn in more straight lines because they are constrained. The forest and its inhabitants are drawn more fluidly because they are freer.

This is certainly possible in CG animation, but Wolfwalkers takes the idea a step further. The squiggly lines are intentionally drawn rougher than usual, literally letting you see the lines themselves at times that gives you the feeling of an unfinished design. This would normally be polished by a clean-up crew, but they are actually going in the other direction here, something Moore explained in interviews. It successfully blends two separate eras — Wolfwalkers borrows from medieval European paintings, and Studio Ghibli films such as The Tale of the Princess Kaguya, which Moore has noted as an influence — and delivers an experience unique unto itself. Wolfwalkers seems set to get Apple its first nomination in the best animated movie Oscar category.

1650 Kilkenny, Ireland — that is the politically-charged setting of Wolfwalkers, the same year that the eponymous capital of the Irish Catholic Confederation fell to Oliver Cromwell, who emerged victorious in the English Civil Wars and subsequently led a brutal religiously-fuelled campaign against the Irish. Cromwell isn"t mentioned by name on Wolfwalkers, but is present as the film"s unnamed villain Lord Protector (voiced by Simon McBurney), a title that was used by Cromwell. The Lord Protector has tasked his expert wolf hunter Bill Goodfellowe (Sean Bean) to kill or drive away all the wolves in a nearby forest, and Bill"s daughter Robyn (Honor Kneafsey) — the young protagonist, as is the case on all Cartoon Saloon stories — is hoping she can help her father in the mission.

But all Bill wants for Robyn is to be safe, just like his late wife would have wanted. And that means staying away from the forest and inside the city"s walls. It"s not a fun place to be, especially for someone like Robyn, an Englander surrounded by Irish folk that despise them. She"s an outsider. Predictably, Robyn sneaks out of Kilkenny and follows her father into the forest. But her wolf-hunting plans don"t go too well, as she finds herself chased by a pack. She"s saved by a forest girl with flowing ginger hair named Mebh Óg MacTíre (Eva Whittaker), who reveals that she can command the wolves to her will and has a wolf avatar that springs out at night. Mebh is what they call a “wolfwalker”.

On one level, giving voices to the wolf characters serves Moore"s constant theme of “humans should live in equilibrium with other species”, but it also has a bigger purpose on Wolfwalkers. The wolves are a metaphor for the Irish. After all, Cromwell referred to them as “barbarous wretches” — in the film, the Lord Protector once screams: “What cannot be tamed must be destroyed” — and it is modus operandi for xenophobic politicians to characterise a certain group as “animals”, in a bid to turn them into a common enemy and drive support for their genocidal cause. Wolfwalkers is about otherisation. And the film spins an unexpected perspective shift to make Robyn the wannabe wolf hunter see the world in another light, and realise the horrors of what it"s like to be on the other side. 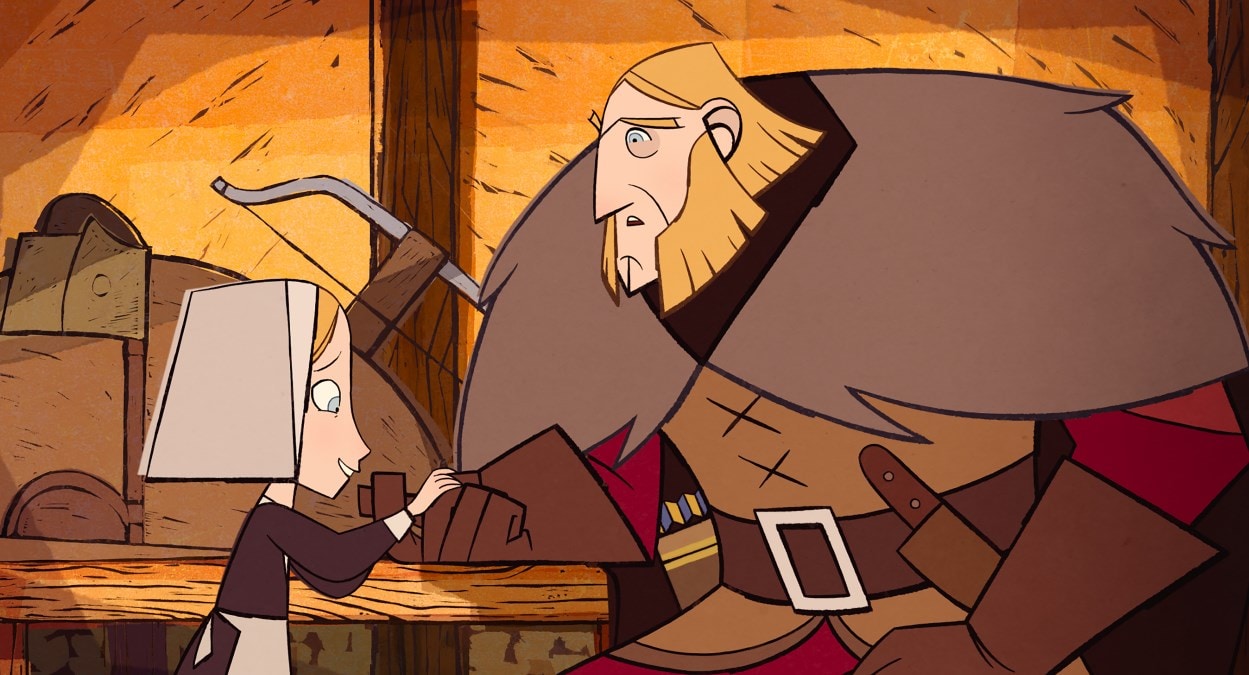 Yes, the plot is a little predictable — adults will see some events coming and there"s a bit of Avatar in here — but it"s a delight to watch its young leads go about saving the day. And at times, Wolfwalkers is unable to cohesively bring together its ideas like Moore did last time around with Song of the Sea so masterfully. But it"s also more than that. There"s a tinge of poignancy to its (naturally) happy ending: wolves are extinct in Ireland today. Moore"s films have this constant thread of children fighting against parental restrictions (who just want to keep them safe though it turns into a case of overparenting at times) and discovering the beauty of the outside world in the process. This is all the more painful reminder of what 2020 has taken away from kids, who have had to be cooped up in their homes.

And it"s great to see Cartoon Saloon be so determined and passionate about traditional animation, more so on a modest budget, when more and more studios seem to be abandoning the art form. Wolfwalkers is a wonderful family movie, and just the kind of thing we need in a world that seems to be more divided than ever.

Wolfwalkers is out December 11 on Apple TV+ worldwide.